* Featured on The Real SG and TR Emeritus. 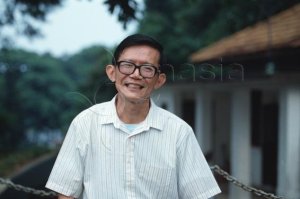 He was imprisoned for 23 years without charge or trial, then placed under house arrest for another 9 years, with restrictions on his place of abode, employment, travel, and exercise of political rights.

Dr. Chia was a university physics lecturer when he entered politics.

3. The Power-Packed Minute in Parliament

This is an excerpt from Parliamentary Debates of the Dewan Ra’ayat (House of Representatives), dated 19 September 1964.

Dr. Chia was given one minute more to “complete his speech.”

Here are some of the things he managed to say:

“Sir, when the Prime Minister talks of defending our country, we find it hollow. . .This Government is oppressing the people; more than 200 political leaders and trade unionists are in the jails of Singapore. . .Political dwarfs like Mr. Lee Kuan Yew can strut around and talk big. . .All this nonsense [with] these riots is just to hide the truth that the main culprits belong to the ruling parties.”

Dr. Chia was in his mid-twenties when he was arrested on 29 October 1966 under the Internal Security Act (ISA), which allows for indefinite detention.

Dr. Chia was detained for his role in organizing and leading an illegal protest march of supporters to Parliament House on 8 October 1966. He had handed a letter to the Clerk of the House demanding for a general election, the release of all political detainees and the nullification of “undemocratic” laws.

The other detainees were released after they signed a document promising to renounce violence and sever ties with the Communist Party of Malaya (CPM).

In his own words:

“To renounce violence is to imply you advocated violence before. If I had signed that statement I would not have lived in peace.”

For more than 30 years, Dr. Chia would quietly but steadfastly refuse to cave in to the authorities’ demand that he publicly confess to being a violence-oriented communist.

“If the government had the evidence,” Dr. Chia stated in a 1998 feature in Asiaweek, “it should have tried me in open court.”

Dr. Chia’s detention for 32 years — without charge or trial — gives Singapore the dubious honor of holding one of the world’s longest-held political detainees.

The length of detainment is technically longer than that of Nelson Mandela (who was put on trial in 1964 and spent 27 years in jail).

His eyesight deteriorated from many years spent in a darkened cell. During his interrogation, he was told that prisoners held in the darkened cell would go insane in a few days. The authoritarian PAP regime also kept him subjected to day-long interrogations in a freezing cold room.

Later, the regime started pressurizing Dr. Chia’s aged father to persuade him to give up. Security agents were also directed to drive Dr. Chia through the streets of Singapore, while taunting him to sign his confession paper. They told him he would “rot in jail” otherwise.

When those tactics still failed to break Dr. Chia’s spirit, he was sent into domestic exile on Sentosa island on 17 May 1989.

Dr. Chia was made to pay rent for the one-room guardhouse, as well as pay for his own food.

This was due to the Singapore government’s audacious assertion that he was under “observation status” and not a prisoner. Dr. Chia thus negotiated a deal which allowed him to work as a freelance translator for the Sentosa Development Corporation.

In 1992 Dr. Chia was allowed to move back into his parents’ home, and in 1997 he was allowed to accept a fellowship from the Hamburg Foundation in Germany for politically persecuted persons.

In November 1998, all remaining restrictions were lifted. Dr. Chia immediately called upon the Government to repeal the ISA, citing that the ISA is a law that “tramples on human dignity and strikes fear into the mind of the people.”

For three decades, mild-mannered Dr. Chia was branded by the Singapore government as a violent “communist revolutionary” and a threat to national security.

Dr. Chandra Muzaffar, a political science professor at the University of Malaya, said:

“It is a damning indictment on the Singapore Government to have held a chap for all those years and then when finally releasing him issue all those restrictions. It was such an inhuman thing to do.”

Established in 1988, the Lim Lian Geok Spirit Award is the highest honour in the Malaysian Chinese community. The award is bestowed on those who live up to the spirit of Lim Lian Geok, former Chairman of The United Chinese School Teachers’ Association Of Malaysia.

In 2011, Dr. Chia was honored with the prestigious LLG Spirit Award.

The 70-year-old was fondly remembered by the 400 people attending the award presentation at the Confucian Private Secondary School in Lorong Hang Jebat.

At the ceremony, Dr. Chia shared his words of wisdom:

“A university is not an ivory tower. . .what matters is its spirit, its capacity in bringing up graduates that empathize with the people and work for the progress of mankind and world peace. . .Just as Mr. Lim Lian Geok had said, his body might be destroyed, yet his spirit would survive and flourish. [That spirit] will always live in the heart of the people. It will always inspire us to overcome all difficulties and march on.”

Associate Prof. Andrew Aeria, a political scientist at Universiti Malaysia Sarawak (UNIMAS), aptly described the sharp-witted Dr. Chia as “a shining icon to the struggle for human rights and democracy.”

(i) Integrity and Conscience

Dr. Chia: “[Signing a false statement] would have been against my conscience. I wouldn’t have been able to live in peace with myself.”

“Under the PAP rule, there is no genuine parliamentary democracy. . .there is always the danger of one-party rule slipping into one-man rule, and worse still, into dynastic rule. The PAP government does not like critical newspapers or publications, and is intolerant towards sharp criticisms. They seem elitist and arrogant, regarding themselves as the best and the most suitable to rule Singapore. And they rule it with iron-handed policies.”
(Dr. Chia Thye Poh, 1989)

Dr. Chia: “My ideal has not been dampened after [more than thirty] years under detention. In fact, prison life can only make a person more determined to fight against oppression and for a fair, just and democratic society.”

Dr. Chia insists he bears “no personal grudge against anyone” (including his tormentors responsible for the deplorable 32-year detention).

Dr. Chia: “The struggle for democracy is much more than personal battles. Democracy is not about violence.”