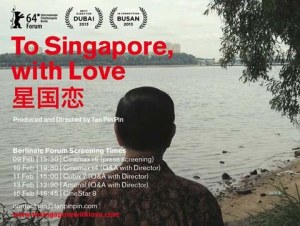 The biggest feeling in response I have to the MDA’s statement is disappointment. As a person with a functioning brain, and a person who was born in and grew up in Singapore, I also feel insulted with the MDA’s official stance on the matter.

This isn’t a fictitious movie that depicts a disrespectful portrayal of Singapore’s people or its culture. It is a documentary that includes content pertaining to certain “periods in Singapore’s history that are fraught with controversy.”

A documentary is defined as follows: “A movie or a television or radio program that provides a factual record or report.”

It is sad and shameful that Singaporeans are not being allowed to hear these people’s side of the story.

Are Singaporeans too dumb to handle the facts? Can they not be trusted to make their own conclusions from a variety of sources?

Why continue to hide and keep things covered up, when there is, according to PM Lee Hsien Loong’s 2013 New Year Message, a “clean and transparent system of governance”?

As Alex Au wrote in his blog post, “Trust can never be restored by concealment and gagging. Only openness will do.”

Historian Dr Thum Ping Tjin had this to say via a Facebook status update:

“In its statement, MDA said it had assessed the contents of the film, and decided that it undermined national security. It added that legitimate actions taken by security agencies to protect the national security and stability of Singapore are distorted as acts that victimised innocent individuals.”

The MDA’s statement is wrong. Research has proven that the primary aim of Operation Coldstore and other instances of repression was to remove political opposition to the Singapore government. If the MDA disagrees, they should ask the ISD to release documentary proof and allow us historians to revise our research. Having seen this film last week, the one thing that all the interviewees have in common is a deep, abiding love for Singapore. This movie reinforces national security by demonstrating the deep loyalty and commitment of Singaporeans to Singapore, even those forced unjustly into exile.

People deserve to know the facts pertaining to their own country’s history.

I, for one, always appreciate facts from sources other than watered-down, sanitised social studies textbooks which sometimes present only one side of the story.

UPDATE #1: There is a Google form set up by the film and art community to collate more signatories in support of this film. More information on Google and Facebook.

Tan Wah Piow’s statement on the banning of the film:

To ban the film would be an infringement to Article 14 of the Singapore Constitution which protects the freedom of expression. The only way to circumvent Article 14 of the Constitution is to invoke the security threat mantra. This would be implausible in any democratic country where the rule of law interprets “security threat” only in the strictest and narrowest sense.

But Singapore is a different story. That is why the Cabinet has to be very highly paid, because our ministers and Prime Minister are very clever.

But the people are not stupid either. One day, the people will know who is the serial abuser of the Singapore Constitution.

One thought on “To Singapore, With Love”