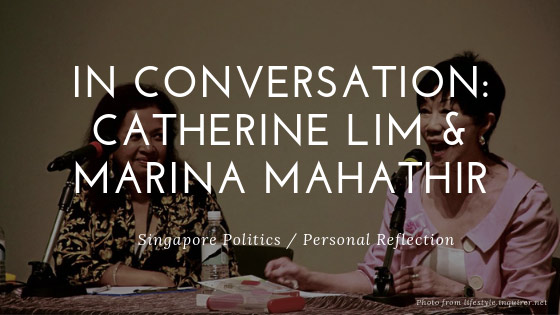 This post is about two years overdue, although the experience of the event is still fresh in my mind :)

I was involved with a couple of events during the 2012 Singapore Writers Festival.

At the time, I circled a number of programmes in my SWF booklet, since I wanted to attend as many of the events as I could.

One that I thoroughly enjoyed was a panel with Catherine Lim and Marina Mahathir. This despite the fact that I had largely been a politically indifferent and apathetic youth when I was growing up in Singapore.

This was the text which described the programme:

Two of our region’s leading writers and social commentators, sometimes controversial, always engaging, talk about what it means to use the written word to engage in civic society. How do they deal with naysayers and critics, and what keeps them awake at night?

These were their bios in the SWF 2012 booklet.

Marina Mahathir writes a fortnightly column on social issues in an English-language Malaysia daily, is an avid blogger, is active on Facebook and Twitter, and is also a television and film producer. She writes and speaks regularly on human rights, particularly where it relates to gender issues, Islam and HIV/AIDS. One to walk the talk, Marina was president of the Malaysian AIDS Council from 1993 to 2005, and currently sits on the board of Sisters in Islam, which advocates justice and equality for Muslim women. She is the daughter of the fourth Prime Minister of Malaysia, Tun Mahathir Mohammad.

Well-known and outspoken Singaporean author Catherine Lim has more than 20 titles to her credit — from short stories to novels, reflective prose and poetry, and satirical pieces. Her works deal largely with the East-West divide, Asian culture, women’s issues, and Singapore’s culture, history and politics. She has won national and regional book prizes and was conferred n honorary doctorate in literature by Murdoch University, Australia, and was made a Knight of the Order of Arts and Letters by the French Ministry of Culture and Information.

Here’s a photograph I took with each of these dynamic ladies at the end of the discussion. I don’t know how I managed to grab a pic as it was all done in a rush, but I’m glad I did!

I remember being very engaged by these two speakers when they first stepped into the room that day. My immediate impression (before each of them actually began to be “in conversation” with the other) was that they were both very smiley and energetic, with a good sense of style.

Both of these speakers were/are incredibly vibrant and passionate about politics, civic engagement, and the subject of human rights. Needless to say, it was a lively discussion. There were several quips that seemed to stray across OB “out of bounds” Markers, as evidenced by the entire audience gasping — or laughing — spontaneously.

The room was so packed that people were standing by the sides and the back of the room.

Halfway through the discussion, a middle-aged woman in the audience started to ramble when she asked a question (a mic was given to her — maybe this was during the QnA portion of the talk). She got increasingly aggressive with her tone and one of the questions she directed to the speakers was:

“Where were you academics when Singapore needed its academics/intellectuals to [speak up]?”

If I remember correctly, what she was saying was in reference to Operation Spectrum or Coldstore, neither of which I was aware of at the time due to my aforementioned woeful teenage political unawareness.

Catherine Lim was responding sincerely even as the woman interrupted her. The festival director informed the audience member in a calm but stern way that they were to “maintain the peace” (not in those exact words, but to that effect) which was a responsible and respectful way of handling the situation so as to prevent any chaotic or ugly outcome.

That incident made me feel quite nervous (I was wondering how the guest speakers on the panel would answer, with a full-house audience looking on). Part of me also felt surprised at how passionate people could be, which was a world of difference from a climate of political slumber where people are too indifferent or fearful to be involved in any way. I remember thinking that the incident would probably never be reported in The Straits Times (please feel free to correct me if there was indeed a mention of it in the local mainstream media).

Throughout the conversation, what was most evident was these ladies’ razor-sharp intelligence, combined with their poise, diplomacy, and lack of arrogance. The combination of these qualities made an inspiring and refreshing impression on me — along with many other members in the audience, I’m sure.

Maybe I felt compelled to attend the event due to my (at the time) latent interest in socio-political issues. I am thankful I had the chance to.

It was nice to see how crowded the room was. The full-house attendance challenged the notion that local Singaporeans are a perennially politically disengaged, apathetic lot.

Notes: Lifestyle.INQ has a nice write-up of the event.

One thought on “In Conversation — Catherine Lim and Marina Mahathir (2012)”