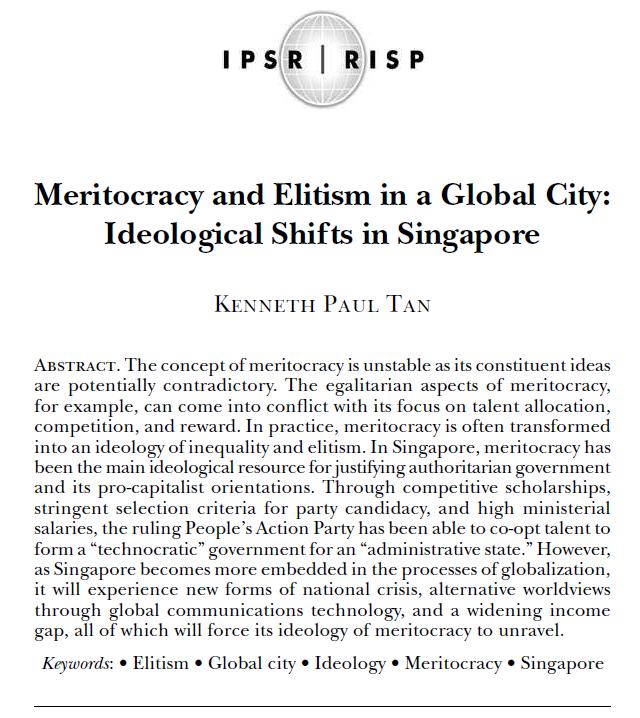 Excerpts from “Meritocracy and Elitism in a Global City: Ideological Shifts in Singapore”

1. Meritocracy: Government or the holding of power by people selected on the basis of their ability.

2. Elitism: The advocacy or existence of an elite as a dominating element in a system or society.

1) In practice, meritocracy is often transformed into an ideology of inequality and elitism.

2) Robert Klitgaard (1986: 1) discusses how [meritocracy] gets co-opted by the winners, who then become an elitist, “self-conscious, exploitative ruling minority” bent on perpetuating their power and prestige.

3) (cont.) Elitism sets in when the elite class develops an exaggerated “in-group” sense of superiority, a dismissive attitude toward the abilities of those who are excluded from this in-group, a heroic sense of responsibility for the well-being of what the in-group “laments” as the “foolish” and “dangerous” masses, and a repertoire of self-congratulatory public gestures to maintain what is sometimes merely a delusion of superiority.

4) Conspicuously wide income and wealth gaps, instead of serving as an incentive, can breed a culture of resentment [and] disengagement among the system’s losers.

5) Not only has the term “meritocracy” become enshrined and celebrated as a dominant cultural value in Singapore, it has also come to serve as a complex of ideological resources for justifying authoritarian government and its pro-capitalist orientations.

6) Through its long incumbency, the PAP has secured important structural and tactical advantages such as effective control of the mass media, civil service, and para-political grassroots networks. . .a meritocratic electoral process would need to be more adequately competitive to provide an incentive for the “best” people (regardless of social background, ideological inclination, and party affiliation) to come forward and serve as political leaders.

7) Although relentlessly elitist in its recruitment of parliamentary candidates where qualifications and achievements are concerned, the PAP has maintained that its candidates come from all walks of life.

9) A meritocracy that defines merit almost exclusively in terms of educational and professional qualifications and commercial success has made the traditional PAP-controlled grassroots sector seem much less relevant and effective in contemporary public life.

10) James Cotton (1993: 10–11) observes that the “[PAP] party has … become a shell, a convenient electoral machine for maintaining in office an elite which is ultimately self-selected, self-promoted and self-defined.”

11) In a study of the structure of government-linked companies (GLCs) in the early 1990s, Werner Vennewald (1994) observed a high concentration of control in the hands of a small number of permanent secretaries, the powerful civil service chiefs who tend to hold multiple and interconnected directorships of various public-sector bodies and committees. . .Ross Worthington (2003) [concludes] that state-society relations in Singapore are “elitist and oligarchic” with community organizations, trade unions, and industry associations negligibly represented in GLCs.

12) Insisting that PAP government decisions are the best possible ones generates a false sense of security and a general feeling that there is no need to keep a watchful eye on the daily business of government. Such conditions open the way to serious mistakes and corrupt practices in the future.

13) The PAP government is popularly perceived, even by its many admirers, as arrogant, insensitive, compassionless, and convinced of its own superiority, what Ezra Vogel (1989: 1053) calls a “macho-meritocracy.” Vogel also observes how meritocracy emits an “aura of special awe for the top leaders … [which] provides a basis for discrediting less meritocratic opposition almost regardless of the content of its arguments.”

14) As the long-time political winners, the PAP has been able to define merit in Singapore’s politics [and] influence strongly the people’s understanding of who deserves to win. Through higher monetary deposit requirements and increasingly stringent qualifying criteria for various elected positions in government, the PAP has also been able to influence the question of who can afford and qualify to stand for elections.

15) Veteran journalist Seah Chiang Nee (2006) observes how only “a few newer MPs are social workers or people with good community links, but compassion, charity and humility generally rank low in priority in a candidate’s qualities.”

16) The idea that money will draw the “best” people into politics and give them fewer reasons to be corrupt ignores the possibility of people going into politics for the “wrong” reasons: the lure of personal prestige and monetary gain can produce a dangerously intelligent and self-interested class of political elites who will readily compromise the national interest to satisfy their own needs and who will have the unchecked power to do this indefinitely.

17) Through encounters with alternative political websites, the disadvantaged and the disenchanted learn to articulate their condition in ways that the official discourse of meritocracy has excluded.

18) As the economic and political elite are rewarded (or are rewarding themselves) with larger prizes, a vast and visible inequality of outcomes will replace the incentive effect with a sense of resentment [among] those who perceive themselves as systematically disadvantaged.

19) As public-sector careers become more lucrative, civil service and ministers’ salaries will [turn] into a preoccupation with staying in power mainly for the money and achieving this through image politics, vote-buying, and so on.

Source: “Meritocracy and Elitism in a Global City: Ideological Shifts in Singapore,” by Kenneth Paul Tan (2008) 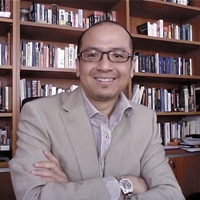 KENNETH PAUL TAN is Vice Dean (Academic Affairs) and Associate Professor at Lee Kuan Yew School of Public Policy, National University of Singapore, where he has taught since 2007. His publications include journal articles and book chapters on democracy, civil society, media and multiculturalism.

5 thoughts on “Excerpts from “Meritocracy and Elitism””