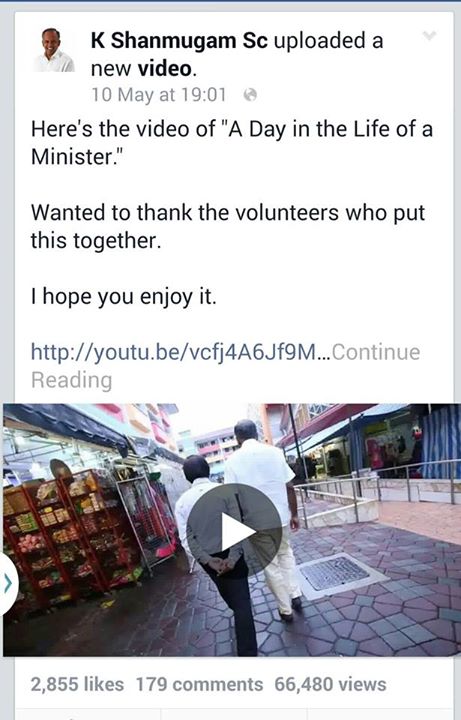 Check out the hypocrisy archives for more examples.

On the 10th of May 2015, you uploaded a video entitled “A Day in the Life of a Minister”, which features a camera crew tracking your activity of the day. It was an unscripted video shot and edited in the style of a reality-TV programme.

You stated that the 12-minute long video was made by “volunteers”. By that, one would assume that this is not a government-sponsored production. As such, may I inform you that this video is not exempted under section 40 of the Films Act and therefore in possible violation of section 33 which criminalises “party political films”, the penalties of which are a fine not exceeding $100,000 or to imprisonment for a term not exceeding 2 years.

I cite the following clauses of the Films Act relevant to “A Day in the Life of a Minister”.

(a) which is an advertisement made by or on behalf of any political party in Singapore or any body whose objects relate wholly or mainly to politics in Singapore, or any branch of such party or body; or

(b) which is made by any person and directed towards any political end in Singapore;

For the purposes of this Act, a film is directed towards a political end in Singapore if the film —

(a) contains wholly or partly any matter which, in the opinion of the Board, is intended or likely to affect voting in any election or national referendum in Singapore; or

(b) contains wholly or partly references to or comments on any political matter which, in the opinion of the Board, are either partisan or biased; and “political matter” includes but is not limited to any of the following:

(i) an election or a national referendum in Singapore;

(ii) a candidate or group of candidates in an election;

(iii) an issue submitted or otherwise before electors in an election or a national referendum in Singapore;

(v) a Member of Parliament;

(vi) a current policy of the Government or an issue of public controversy in Singapore; or

(vii) a political party in Singapore or any body whose objects relate wholly or mainly to politics in Singapore, or any branch of such party or body.

None of the following films shall be regarded for the purposes of this Act as a party political film:

(e) a documentary film without any animation and composed wholly of an accurate account depicting actual events, persons (deceased or otherwise) or situations, but not a film —

(i) wholly or substantially based on unscripted or “reality” type programmes; or

(ii) that depicts those events, persons or situations in a dramatic way;

(a) any film sponsored by the Government;

(b) any film, not being an obscene film or a party political film or any feature, commercial, documentary or overseas television serial film, which is made by an individual and is not intended for distribution or public exhibition; and

(c) any film reproduced from local television programmes and is not intended for distribution or public exhibition.

(2) The Minister may, subject to such conditions as he thinks fit, exempt any person or class of persons or any film or class of films from all or any of the provisions of this Act.

(3) An exemption granted under this section may be withdrawn at any time.

I put it to you that the video “A Day in the Life of a Minister” may constitute an illegal ‘party political film’ under section 33 of the Films Act because:

1. It is an advertisement made by or on behalf of a political party in Singapore whose objects relate wholly or mainly to politics in Singapore.

2. It is made by a person and directed towards a political end in Singapore – by featuring a Member of Parliament.

3. It is a film that is substantially based on unscripted and “reality” type programmes, and it also contains dramatic elements.

4. It is not a government-sponsored film.

Of course, the Minister may opt to exercise section 40 of the Films Act to exempt your film from the Act.

In the interest of upholding transparency in the application of the Rule of Law in Singapore, this letter will be made public. I look forward to your reply on this matter.

The above was emailed to K. Shanmugam on 11 May.

MARTYN SEE is a Singaporean political blogger and filmmaker with two banned films, two police investigations and a conscience that just won’t let him rest.