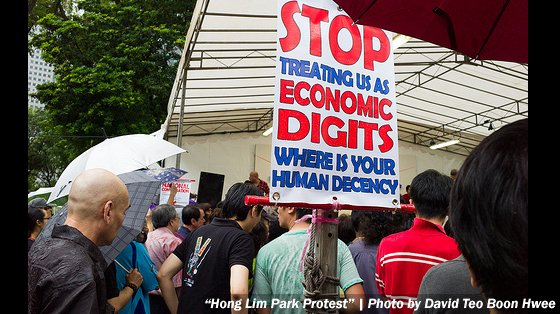 A paper on the main cause of Singapore’s brain drain.

Excerpts from “The Causes of Emigration from Singapore: How Much Is Still Political?”

1. Brain Drain: The emigration of highly trained or intelligent people from a particular country.

1) Efforts to maintain a robust Singaporean economy have had to confront the serious challenge of brain drain from the city-state.

2) To address the negative effects of this problem, Singapore’s ruling People’s Action Party (PAP) has adopted a policy of increasing reliance on a foreign labor force. The PAP appears to ignore the continued loss of human and intellectual capital.

3) Data from [surveys] indicate that anti-PAP and pro-democratic ideas strongly influence the decision of native Singaporeans to leave the island state. These findings suggest that democratization and an expansion of business and technical education would be more effective in preserving economic growth than a policy of importing labor.

4) Observers question whether PAP authoritarianism itself is driving young, highly educated Singaporeans to leave their country of birth.

5) Yap Mui Teng argues that a sense of “helplessness and fear in the face of an overpowering political structure that the average person cannot hope to participate in [or] even understand” drives emigration. Such “voting with one’s feet” clearly harms Singapore’s economy.

6) In 2002, Singapore reportedly experienced the most elevated out-migration rate in the world.

7) Every year, upwards of one thousand educated Singaporeans renounce their native citizenship in favor of that of their new homelands. . .even emeritus senior minister Goh Chok Tong admitted that “at his high school reunion, it seemed all his best friends had emigrated to the United States or Australia.”

8) While the PAP went on to receive 60.1 percent of the popular vote in 2011, this majority was anything but a victory for the ruling party given its history of manipulating electoral rules to its own advantage.

9) More importantly, the opposition won its first Group Representation Constituency (GRC; a multi-seat bloc district). According to the Asia blogger for The Economist, PAP ministers suffered this electoral blow due to voters’ perceptions that the incumbent government had “lost touch” with the concerns of Singaporeans and allowed a “rapid influx of immigrants.”

10) 64.6% of Singaporean emigrant interviewees in Australia in 1989 reported that the political system was the worst aspect of living in Singapore:

“With regard to the government, the respondents were critical of the ‘limited freedom,’ ‘high-handed control of daily life,’ ‘government intolerance of opposition,’ and ‘short-sighted and forever-changing government policies’.”

11) In [the data we analyzed], a respondent who strongly opposed the ruling party and fervently endorsed democracy would be 91.7% more likely to emigrate than would an interviewee who loyally backed Lee Kuan Yew’s party and completely rejected democracy.

12) Of the forty-five Singaporean respondents in [the two immigration data sets], thirty-five said they had had little or no “ability to influence government decisions” in their country of birth. [Another] questionnaire from the forty-five respondents contained seventeen politically related “things they disliked most” about their former homeland (e.g., “the laws of the country”).

13) The political environment in Singapore seems to be the most important factor in determining emigration from Singapore.

14) In order to maximize the number of young, highly skilled Singaporean natives who remain in the country after university, Singapore’s political and educational leaders need to make significant changes.

15) The most important change the PAP should make is to open up the political system. As Sullivan and Gunasekaran suggested as early as 1994, increased public debate before decisions are made would help people feel less dissatisfied with the political conditions in Singapore and therefore less likely to leave.

16) One of the policies Yap suggested was “a more open government” to “erase the credibility gap between the government and the people.”

17) The establishment of true democracy would likely foster support for the government and the political system, as free and competitive elections often create strong national identity.

Source: “The Causes of Emigration from Singapore: How Much Is Still Political?” by Joel S. Fetzera & Brandon Alexander Millan (2015)

Joel S. Fetzer is a Professor of Political Science at Pepperdine University. Immigration Politics is one of his academic interest areas.

Brandon Alexander Millan is an independent scholar from the Political Science Department of Santa Monica College.

2 thoughts on “The Main Cause of Singapore’s Brain Drain”