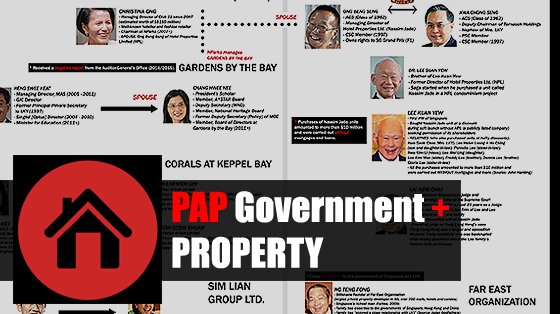 Thanks to netizens + readers for contributing to this post.

References below. Presented in six parts.

EXCERPTS on PROPERTY in SINGAPORE

1) We can infer from their cash-only purchases of condominiums during the “Hotel Properties Scandal” that all of the extended Lee family are probably cash millionaires. . .government connections can be very lucrative in state-run Singapore.

2) The government is “the largest landowner in Singapore. . .the Land Acquisition Ordinance of 1955 and its amendment in 1966 were the chief policies that laid the groundwork for [the Singapore government] to acquire land from private holders.

3) CityDev is the third largest landowner in Singapore after the government and the family of Ng Teng Fong.

4) Forbes’ list of the 50 richest people in Singapore was dominated by real estate moguls as property emerged as the main source of wealth for 12 tycoons on the list.

5) Property is the main factor in growing prosperity of two-thirds of names on Forbes top 50. 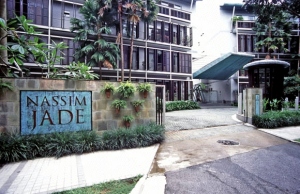 In 1996, Lee Kuan Yew bought a Nassim Jade unit (a condominium project by Hotel Properties) at a discount during the soft launch without HPL (a publicly listed company) seeking permission of its shareholders.

LKY’s relatives who also purchased units at discounts include:

All the purchases amounted to more than $10 million and were carried out without mortgages and loans.

Lai Kew Chai was a Malaysia-born Singaporean judge and the longest-serving member of the Supreme Court Bench, having served for almost 25 years as a Judge. He was a former partner of LKY’s law firm of Lee and Lee and a close friend of LKY and family. He bought a discounted unit at Nassim Jade and was the presiding judge on Tang Liang Hong’s case (Tang Liang Hong was a lawyer and opposition Workers’ Party candidate, who was bankrupted after raising questions about the Lee family’s Nassim Jade purchases).

For more details on the Nassim Jade saga, here are some articles:

The above ACS 1962 reunion picture shows that Ong Beng Seng, Managing Director of HPL, was a former classmate or schoolmate of Kwa Chong Seng (nephew of Mrs. LKY).

Christina Ong has been the Managing Director of Club 21 since 2007 (estimated worth of S$150 million). She is a well-known hotelier and fashion retailer and has been Chairman of NParks since 2007.

Her husband is Ong Beng Seng of Hotel Properties Limited (HPL). NParks manages the Gardens By The Bay project.

3. GARDENS BY THE BAY

Heng Swee Keat is married to Chang Hwee Nee. Mr. Heng was Principal Private Secretary to SM Lee Kuan Yew from 1997 to 2000. Ms. Chang, a President Scholar, is the former Deputy Secretary (Policy) of Ministry of Education and a member of the board of directors of Gardens by the Bay.

The development of Gardens By The Bay came under the scrutiny of the Auditor-General in 2015 for lapses in the control of contract variation works.

The Auditor-General’s Office’s test-checks revealed a general lack of documentation, failure to obtain approval and laxity in control over contract variations by NParks in managing the development of the Gardens By The Bay project, which has an estimated total contract value of S$1.06 billion.

There was no assurance that NParks had not spent more funds than necessary.

Checks by the AGO found that managers of the $1 billion Gardens by the Bay project had awarded over $20 million of contracts through a waiver of competition, without compelling reasons.

Mrs. Koh-Lim Wen Gin, a former Urban Redevelopment Authority (URA) chief planner, has been an independent director of Keppel Land since January 2010. She has been a board member of NParks since 2010.

Her daughter, Ms. Koh Lin-Net, was one of the buyers of Keppel Land’s units at its Corals at Keppel Bay project. Koh Lin-Net is the chief executive of the Media Development Authority and prior to that was deputy secretary of trade at the Ministry of Trade and Industry. Ms Koh and her husband Lawrence Low bought a unit at Corals for slightly below $10.1 million.

Mrs. Koh-Lim Wen Gin’s husband is Koh Seow Chuan, retired founder of DP Architects. Under Koh’s leadership, DP Architects has been responsible for many iconic buildings in Singapore, including Suntec City, Paragon, Bugis Junction and Esplanade-Theatres on the Bay.

Ong’s wife, Diana Kuik Sin Leng, is the executive director of Sim Lian (owned by the Kuik family). Sim Lian has undertaken over S$2 billion worth of contracts, including public projects for the Housing Development Board (HDB), DBSS flats, and other government projects.

Ong Chit Chung (1949 – 2008) was a former MP, parliamentary secretary, and a director at Sim Lian. Associate Professor Sim Loo Lee was a former HDB director and an independent director of Sim Lian.

It is interesting to note that the Government did not consider the potential conflict of interests when it invited a Sim Lian board director to also sit on the board of HDB.

Robert Ng Chee Siong is the son of Singapore property tycoon and Far East Organization founder, Ng Teng Fong. Robert Ng is a board member of Temasek and is married to Yeoh Saw Kheng (楊素瓊), the third daughter of Dr. Yeoh Ghim Seng, the former Speaker of Parliament of Singapore (Source: CapitalProfile PDF).

Minister for Defence Ng Eng Hen is said to be the nephew of Ng Teng Fong (who had 10 siblings).

One in six houses in Singapore today is built by the Ng family.

Leong Hong Kee was executive director at Far East Organization from 1993 to 2008 and a member of Singapore’s parliament in Singapore for 32 years until his retirement in 2006.

Heng Chiang Meng served as executive director of Far East Organization from 1996 to 1997, during which time he was also a member of parliament. He resigned from FEO amid allegations of conflict of interest between private and public-sector roles. Heng has been a board director at Keppel Land since 2005.

Kwa Kim Li is the Managing Partner of Lee and Lee law firm. Ms Kwa is a director in Mapletree Commercial Trust. In addition, she sits on the Boards of Sentosa Development Corporation, Lee Kuan Yew School of Public Policy and Singapore Chinese Girls’ School. 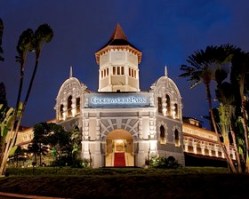 Mavis Khoo-Oei is part of the Khoo clan consisting of 14 heirs of late banker Khoo Teck Puat, founder of Maybank, Malaysia’s most valuable bank (market cap:$23 billion). She is the Chairman of Goodwood Park Hotel. Her husband was Humphrey Oei, who is a grandchild of Oei Tiong Ham. Incidentally, Oei Tiong Ham is a forefather of Teo Chee Hean.

In 1986, the Brunei authorities issued a warrant for Khoo Teck Puat’s arrest on charges of defrauding the bank.

Chew Gek Khim joined the Board of Directors of Suntec Real Estate Investment Trust (REIT) on 21 January 2014 and was appointed Chairman on 17 April 2014.

Edwin Tong is an Allen & Gledhill Partner, who has made headlines as the defense lawyer acting for Pastor Kong Hee in the high-profile City Harvest case. He is a PAP candidate in the Marine Parade GRC in GE2015.

Pastor Kong Hee, City Harvest Church founder and co-owner, paid $9.33m for a luxury duplex unit at Sentosa Cove in 2007. Kong and five others are alleged to have misused $50 million of church funds and then falsified church accounts to cover up the misuse. They are accused of funnelling millions from the church’s building fund to pay for the Crossover Project, to boost the music career of Kong’s wife Ho Yeow Sun.

In 2012, City Harvest Church increased its stake in Suntec Singapore International Convention and Exhibition Centre to 39.2 per cent, from its original 20 per cent in 2010. The church’s executive pastor, Aries Zulkarnain, said “we are co-owners of this property together with Suntec REIT.”

Philip Yeo was formerly the Special Adviser for Economic Development in the Prime Minister’s Office (2007-2011), and former Permanent Secretary in the Ministry of Defence for Defence Research, Logistics and Industry (1979-1985). He is a director of CDL and a member of the advisory board at NTU Business School.

Kwek Leng Joo, brother of Kwek Leng Beng, was appointed as a Director of CDL in 1980. He served as the President of Singapore Chinese Chamber of Commerce & Industry (SCCCI) and is currently an Honorary President of SCCCI.

There is a Kwee Liong Phing in ICIJ’s Offshore Banking database.

Ngiam Shih Chun, relative of Ngiam Tong Dow, is a board member of JTC Corporation.

Augustin Lee, is Deputy Secretary, Ministry of Manpower (2010+), Deputy Chairman of the CPF Board, and a JTC Board Member (2011+).

Former cabinet minister Mah Bow Tan was the fifth biggest shareholder in GSH Corporation in 2014. As of 18 Mar 2014, Mah owned 365,575,000 shares with a current market value of about S$28 million. According to John Harding, Mah Bow Tan’s son, Warren Mah, studied at the prestigious University of Pennsylvania — fully paid for on a scholarship from Monetary Authority of Singapore (a statutory board).

According to Wikipedia, Singapore’s Constitution, and PSC’s 2012 Annual Report:

It considers the suitability of candidates for appointment as Chief Executive Officers of Statutory Boards; it is also responsible for the planning and administration of scholarships provided by the Government of Singapore.

Mr. Chua is also the President of the Singapore Federation of Chinese Clan Associations (SFCCA) and a long-time grassroots leader, serving as Chairman of Bishan East Citizens’ Consultative Committee.

He started the Ho Bee group of companies and ventured into property development. Ho Bee was the sole bidder for the en bloc sale of Coral Island on Sentosa Cove.

As revealed by AGO, 33 days after he “retired” from SCPL, Mr Chua was allowed to tender for sales of Sentosa Cove land through Ho Bee.

Peh Chin Hua is the executive chairman of White Group, a holding company with properties and business interests in China and Singapore. He was also a Singapore Member of Parliament from 1988 to 2001. He holds numerous positions in various clans, including the Peh Clan Association.

In 2013, White Group signed a $12 billion deal to develop a vast township site in China.

2 thoughts on “PAP and Property”