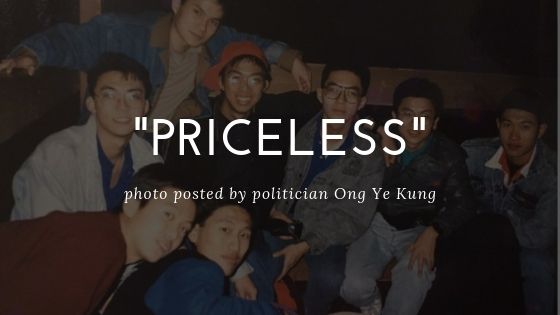 A photo from a few years back, posted by minister Ong Ye Kung.

As one of the commenters wrote: “Meritocracy or coincidence?”

If I can gather my thoughts, I’ll write more in another post on a personal experience up close with the PAP Singapore government’s brand of elitism.

In this short post, let’s leave the photo and its caption to do most of the talking.

And recall the following paragraphs from Michael Barr’s book, The Ruling Elite of Singapore: Networks of Power and Influence:

1. “The networks of hundreds of GLCs that are popularly referred to as Singapore Inc are not just vehicles for the conduct of business. Collectively they provide an extensive and almost inescapable vehicle of elite patronage and power.”

2. “There have been scholars who have been critical of the government in their youth, but by the time they have arrived in government, they have always transformed themselves into models of elite solidarity.”

Thanks to a blog reader for sending in the following info.

BLOG READER: Ong’s picture was probably taken around September 1989. Judging from the individuals’ attire, it is likely to be in London, UK. Most of them are going to London, Cambridge or Oxford for studies.

2. Tan Chuan Jin – Served in the Cabinet since May 2014 as the Minister for Manpower and the Minister for Social and Family Development. His father is Tan Ngiap Moo, who worked as an accountant (and used to work at MacDonald House).